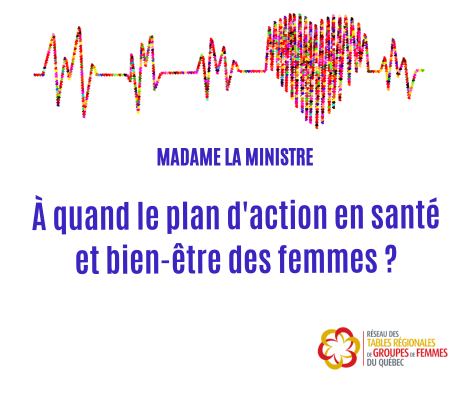 In a press conference, feminist groups came together to celebrate the unanimous motion passed on September 29, 2020 by the National Assembly declaring that the Action Plan on Women's Health and Well-Being must be published by the end of December 2020. After waiting five years, it is more urgent than ever to release an Action Plan that responds to women's needs and prioritizes marginalized women. We hope that this time it will finally be released!

"The health crisis has intensified health inequalities between men and women, and between women themselves, creating an even wider gulf. Indicators show a 20-year step backwards in terms of health and quality of life for women in all 17 of Quebec's health regions", pointed out Marie-Andrée Gauthier of the Réseau des Tables régionales de groupes de femmes du Québec. The crisis is exacerbating already-precarious living conditions among women, as they bear the brunt of its consequences: difficulty accessing care (especially perinatal and birth control), chaotic outpatient home care, difficult reconciliation of family-work-study, an accentuated role as family carers, job loss, economic insecurity, aggravated mental health issues, increased family responsibilities, mental load, and various forms of violence.

This significant decline in women's health and, by extension, their liberation, is even greater for women who are marginalized as a result of their ethnocultural minority status, racialization, sexual orientation, disability status, homelessness or Indigenous identity. The health crisis has transformed existing barriers into insurmountable obstacles.

The release of the Action Plan for Women's Health and Well-Being must be imminent, and the budget accorded to it must take into account the multiple factors that affect women's health in Quebec. We demand that Minister Dubé take all necessary measures to ensure his government’s commitments are respected.