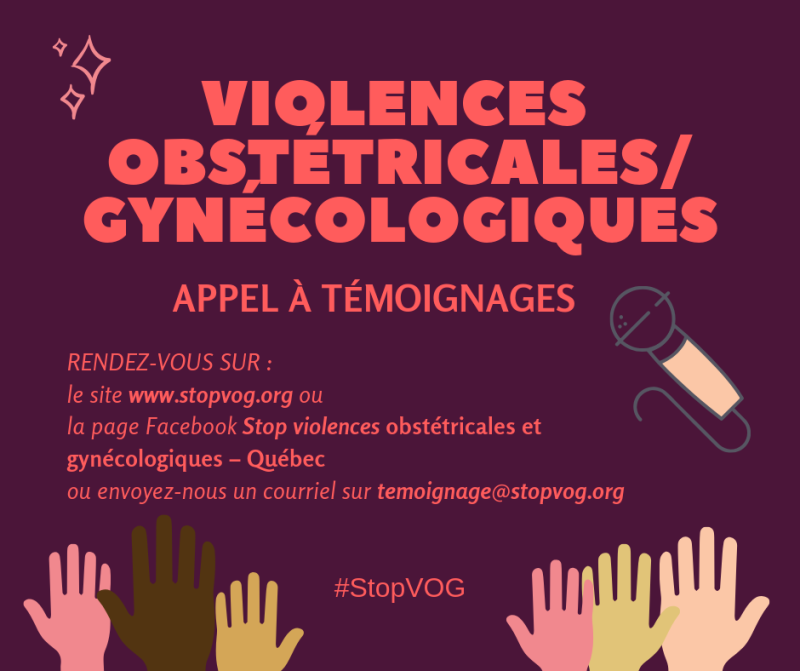 This call is issued as part of an awareness campaign against gynecological and obstetric violence (GOV), which affects women, trans men, non-binary individuals and two-spirit people.

You may have experienced this form of violence if (this list of examples is non-exhaustive):

Gynecological and obstetric violence is systemic and gendered. Related to reproductive and sexual health, this violence occurs in contexts of gynecological or obstetric care. It can be experienced during a birth, miscarriage or abortion, as well as a gynecological appointment, an ultrasound or mammogram. Those living at the intersection of multiple systems of oppression, including Indigenous women, racialized women, women who have suffered from FGM, women living with a disability, lesbian women, and trans and non-binary people are at a higher risk of experiencing this type of violence.

The very existence of gynecological and obstetric violence is rooted in a patriarchal system with contempt for women's bodies and non-conforming bodies. It also stems from a deficient health care system that prioritizes performance over taking the time to listen to patients. Patient-centered care is impossible in such a system. Yet decision-makers refuse to recognize the problem.

Your story could make a difference! We're calling for anyone who thinks they have experienced gynecological or obstetric violence to submit their account of what happened and to file a complaint with the appropriate authorities. Anyone who has witnessed gynecological or obstetric violence against another person is also invited to submit their account (health care professional, doula, student, etc.).

This campaign was developed by the Collective du 28 mai: